Are Australian businesses paying attention ready to seize what’s left of the opportunity of the Asian Century?

This week Brisbane played host to the 2019 Asia Pacific Cities Summit (2019 APCS) and Mayors’ Forum. The summit and forum is focussed on bringing together international leaders of cities with business leaders.

The event brings business, industry and cities together to enable them to build relationships and effectively contribute to the success and sustainability of our cities into the future.

In conjunction with the summit, the economic development group TSBE (Toowoomba and Surrat Basin Enterprise) delivered Ag in the Asian Century National Export and Innovation Conference.

I was honoured to be invited by TSBE to deliver a keynote for the food and agribusiness audience on the progress, opportunities and challenges of Australian businesses in the Asian Century.

I shared with the delegates the origin of the term ‘Asian Century’ as we know it – stemming from a 2012 whitepaper released by the Gillard Federal Government. The whitepaper casts a vision of the abounding opportunities for Australia to benefit from economic, population and middle-class growth across Asia in the 21st century. The document when released captured the attention of the media but Google trends tells us the attention was short lived and largely centred around Canberra. So, how strong is the connection between Asian economic growth and Australian business capitalisation?

Looking at the data available – almost a 5th of the way into the century and the updated forecasts across a range of indicators, it’s clear that there is a great deal of value to be generated from Asia. 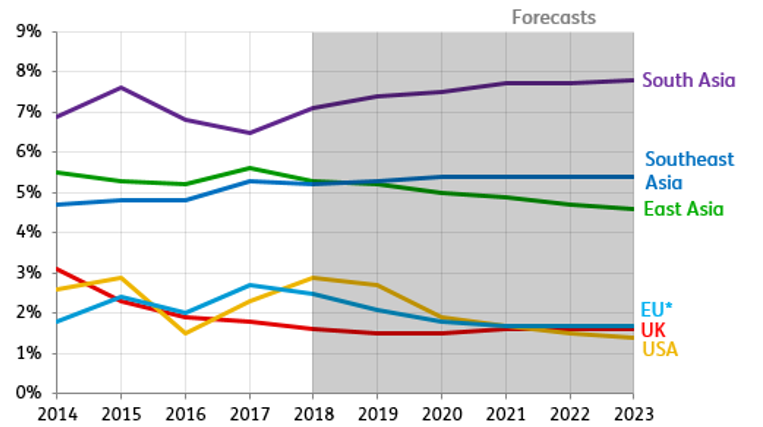 While decreased growth is projected – growth is coming from 8% down to 2% in 30 – 40 years from now – thus it’s safe to conclude there is plenty of economic growth runway yet to use.

With the economic potential clear and the Australian challenge highlighted, we shift gears to how Australian businesses will take advantage of the opportunity.

Understanding the cultural aspects of change and the megatrends within the region is critical to the success of any Australian business in Asia. Specifically;

Spending – the shift of spending within Asian populations to be centred around a previously non-existent middle class who are now both extremely large in number but almost have disposable income not seen in the region in previous generations.

It is off the basis of understanding these aspects that we uncovered Australia’s edge is from leveraging our unique value proposition by focussing on attributes key to Australia’s output of;

With opportunities aplenty in the market for Australian Businesses to take heed of for the rest of the Asian Century, it will be interesting to watch who takes these opportunities and rises with them.

Don't keep this to yourself! :)

Brett Wiskar is Chief Future Officer at Wiley and an active speaker and writer on the subjects of innovation, disruption, technology and it’s impacts on people, businesses and society. He works with clients and project teams on diverse subjects such as digital enablement, innovation, data (big & small), strategy, business models & the future of food industries & markets.